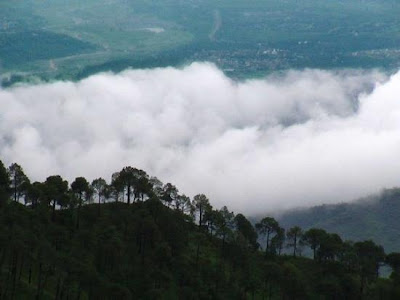 Some months ago out of the blue, a trip to Kasauli came about. It is quite close to where we live hence it offers a much appreciated getaway for us fairly often. Kasauli is a sleepy little quaint hill town in Himachal. It seems to live in an enchanting time warp that belonged to the century left behind. This town gives an impression of an unchanged aura about it…possibly it is just as it was when the British left, over six decades ago. 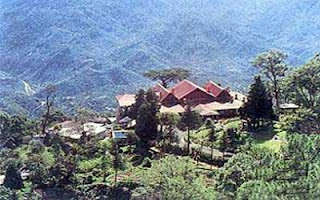 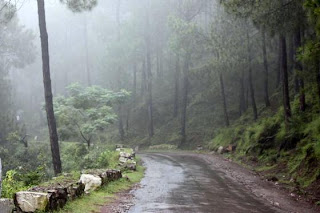 The town’s ambience which to say the least is somewhat that of rural England,  maybe it’s the gabled houses with charming facades and chimneys and neat little gardens with beds of geraniums and hydrangea. The picture is completed by its narrow roads that wander up and down the hillside.
It is quite unspoiled and unlike any other place that I have been to in the hills. 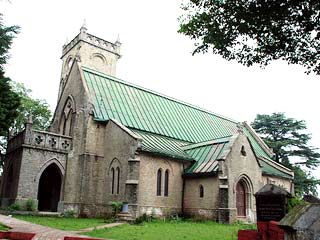 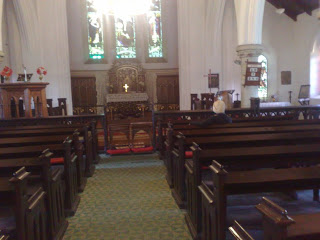 I was told that the entire structure was built at a total cost of Rs 18,000 in 1944, although further Rs 1200 were spent on the steeple. This was a handsome amount by any standards at that time. 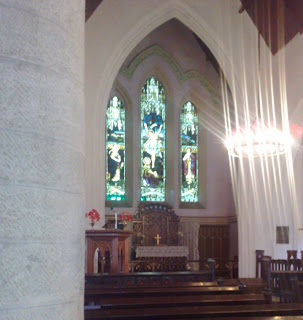 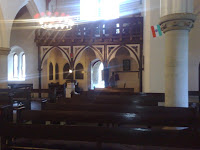 Many of you must have must have at least heard of Kasauli…Some of you may have visited it….And all those who saw ‘1942 Love Story’ must have been awed by stately yet charming  old world nineteenth century structure of the Christ Church held by high stone revetments. It has a cruciform floor plan and the stained glass windows over the altar depicting the Crucifixion are tall and imposing. I was told that the entire structure was built at a total cost of Rs 18,000 in 1944, although further Rs 1200 were spent on the steeple. This was a handsome amount by any standards at that time.
There is  a story attributed, to the then Viceroy of India, Sir John Lawrence – who was known for his candor and blunt talk – It so happened  that when he visited the church on which a great deal of money had been spent, and in his opinion wasted on the steeple ,he was asked to pledge his support to it. As there were still no pews, and as blunt as ever he remarked, “You might as well ask me to subscribe to get a man a hat when he has no breeches”. Can you imagine the furore this analogy must have created.
That church without ‘breeches’ has gone on to become Kasauli’s landmark. The neo-Gothic Christ Church evidently later got both the hat and trousers. It still stands tall as you enter the little town.–though with a limited congregation of 25 people.
Entering the church on the left of the pews I found a commemorative plaque…..
SELBY LORIMER CASSEL LANE and RICHARD LAURENCE ARUNDEL REED.
To the Glory of God and in cherished memory of Selby Lorimer Cassel Lane
. Born 10th October 1901. Died 7th June 1935.


Ist Bn. the 22nd (Cheshire) Regiment who gave their lives fighting a forest fire, which on 7th June threatened to destroy Kasauli.
This memorial is erected 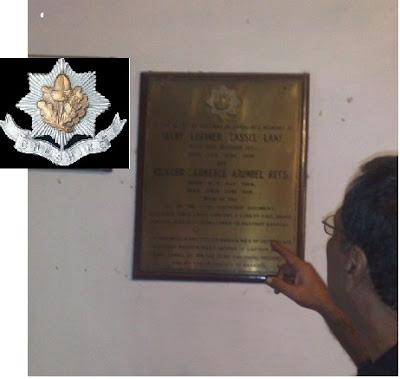 by Marion, wife of Captain Lane
By Percy Dawson Reed, father of Captain Reed.
By all ranks Ist Bn. the 22nd (Cheshire) Regiment And by the residents of Kasauli 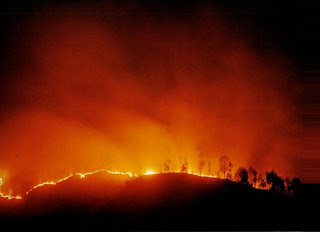 WHAT KIND OF FOREST FIRE WAS IT THAT ALMOST DESTROYED ENTIRE KASAULI? EVEN TODAY THE HILLS ARE COVERED WITH THE TREES OF CHIR, PINE, ELM, HIMALAYAN OAK AND ROBUST HORSE-CHESTNUTS, AND THESE PINES ARE A BLESSING FOR SUMMER’S FOREST FIRE, THE FALLEN DRY TINDER -LIKE NEEDLES AND CONES OF THESE TREES FUEL THE DANGERS OF THESE SUDDEN BLAZES. 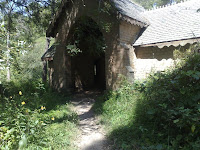 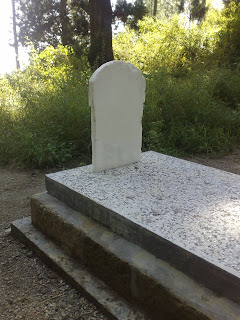 WHAT KIND OF FOREST FIRE WAS IT THAT ALMOST DESTROYED ENTIRE KASAULI? EVEN TODAY THE HILLS ARE COVERED WITH THE TREES OF CHIR, PINE, ELM, HIMALAYAN OAK AND ROBUST HORSE-CHESTNUTS, AND THESE PINES ARE A BLESSING FOR SUMMER’S FOREST FIRE, THE FALLEN DRY TINDER -LIKE NEEDLES AND CONES OF THESE TREES FUEL THE DANGERS OF THESE SUDDEN BLAZES.

THESE TWO YOUNG MEN AGED 34 AND 31 LOST THEIR LIVES…..MARION  LANE ,WIFE OF CAPT LANE MUST HAVE BEEN DEVASTATED WITH HER HUSBAND’S DEATH…SHE WAS FAR AWAY FROM HOME….TRULY FAR, BUT FORTUNATELY  THELONG TORTUOUS JOURNEY THEY HAD TO TAKE IN THE 19TH CENTURY WAS  CUT SHORT BY THE OPENING OF SUEZ

THERE IS VERY LITTLE THAT I COULD GATHER ABOUT THE RAGING FOREST FIRE …BUT LOOKING THROUGH THE RECORDS, I CAME ACROSS  A MENTION OF A ‘GEORGE CROSS’ AWARDED TO ONE PTE RICHARD BLACKBURN, 1ST BATTALION (LATER SERGEANT WITH THE ROYAL WARWICKSHIRE REGIMENT.
WHAT I GATHERED WAS THAT ON 7TH JUNE 1935 THE  FORESTS AROUND KASAULI WERE ABLAZE .A RAGING FIRE, WAS THREATENING TO DESTROY THE TOWN, HENCE A PLATOON OF TROOPS  WAS SENT TO SALVAGE AND LITERALLY FIRE FIGHT, THEY GOT TRAPPED AND WERE IN GRAVE JEOPARDY, THE ROARING FLAMES FORCED THEM RETREAT. SOMEHOW IN THE ENSUING CHAOS THE OFFICER IN CHARGE BECAME SEPARATED FROM THE OTHERS AND WAS STUMBLING ABOUT SUFFOCATED IN A DAZED CONDITION WITH HIS CLOTHING ALIGHT LIKE A LIT UP TORCH.  PRIVATE BLACKBURN, WHO HAD GONE OUT TO LOOK FOR HIM, HELPED HIM TO A PLACE OF SAFETY AND EXTINGUISHED HIS BURNING CLOTHES WITH HIS BARE HANDS. 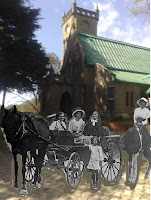 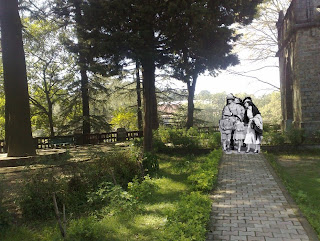 IF IT WAS NOT FOR THE COURAGE THE OFFICER  KASAULI WOULD NOT HAVE SURVIVED
TO SEE ANOTHER SOIREE  AT THE CLUB….OR FAMILIES  RIDE IN  ON HORSE DRAWN CARRIAGES  FOR SUNDAY CONGREGATION CALLED BY THE PARSON …..AND THE PARISH HIGH TEAS 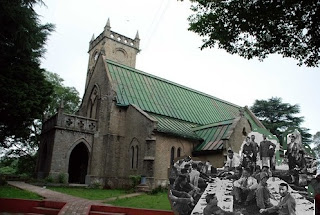 But it was not a forest fire that destroyed the 120-year-old Kasauli Club. It was probably a short-circuit, caused by ancient electric circuits. One winter night , when nobody was around. The single-storey structure, made mainly of wood was burnt to the ground….. The library, the billiards, cards, dining and reading rooms, along with the huge ballroom, went up in smoke. 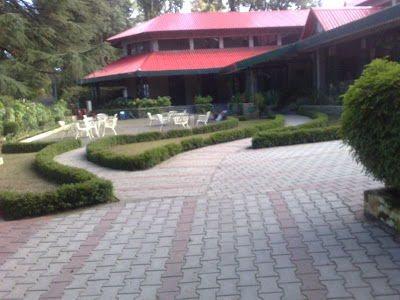