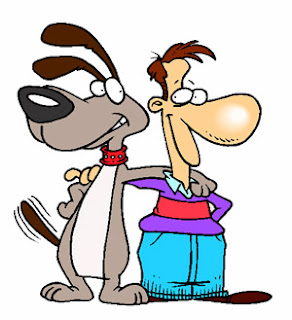 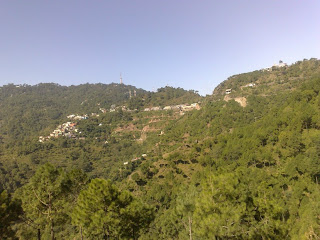 Let me continue with Kasauli…as I a have a few more interesting stories to tell.  I told you earlier that travelling for me is soul reaching of the place which is imbibed from the lives of people who lived there or are still living there at present. My funny curious mind notices the inane and the innocuous, things that many pass by every day, without even a second glance.
The   Y-junction of Upper Mall with Lower Mall is about the most happening place to sit and have tea along with the quirky ‘samosa buns’ and watch The Mall slither down into a cobbled winding street of Kasauli Bazaar. 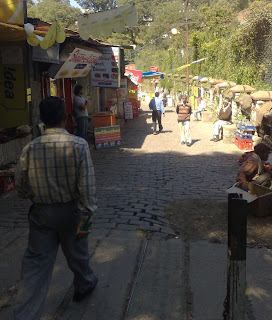 By second day you are accepted as a regular and locals stop to chat with you….or else just flash a warm smile and greeting. Sitting where I was, opposite ‘Kalyan Hotel’ was a statue of a dog…..a black retriever…with nose trifle too long and a trifle upturned. 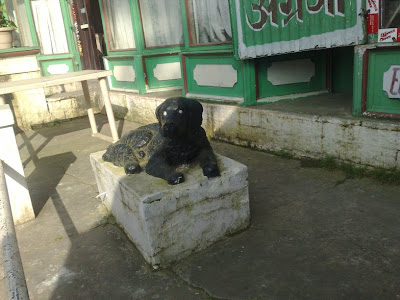 Curiosity inevitably gets the better of me and I casually inquired on the story of the dog…cast  for posterity. 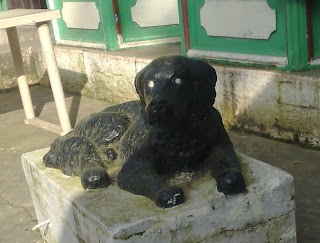 Was it a memorial?
Who did it belong to and more…
Being an out and out ‘dog person’ it intrigued me to probe on….The more I delved into the past the lesser I could get out of anyone….the shopkeepers, the present owners of ‘Kalyan Hotel’….and even the locals passing by. Not one person could tell the dog story; it was with great social networking that I got the fragmented minutiae to put together.

It seems Kalyan Hotel in the era gone by was known as ‘B Kalicharan & Sons’, The chemists and druggists….it was a focal point for members of 'The Raj'. Seth Ji , that is  B Kalicharan was the richest landowner I was told. Another interesting trivia was added by the owner of ‘Paan and cigarette shop…as per his colourful account, Sethji was so influential that when he took a walk on ‘The Mall’ the DC…a representative of the Queen walked behind him. Well….that’s the way he told me.
So coming back to Kalyan Hotel, the erstwhile ‘B Kalicharan & Sons’ and the dog statue….
It so happens one night some night raiders thought they would decamp with all imported goodies and English Wines, Liquor and cash that they could find ….In those days Druggists were the ex officio  Wine shop, licensees. The dog saw the burglary in progress and attacked the robbers who ran out with whatever booty they could collect leaving the rest behind. Our little hero not to outdone went and woke up his masters and not only that …I am told he led them to the burglar's den and these hapless creatures were caught just as they were dividing the booty.
I was told that the little chap had become the hero overnight. An English patron of the shop….evidently a dog person…..sent the lil’ hero’s picture to a bronze foundry in North Devon England…..a wax reproduction of the sculpture was created, given a ceramic shell. The wax is replaced with molten bronze and an enduring sculpture was born. The sculpture was shipped back and installed presumably as a memorial to ‘Man’s best friend’.
But then this is nothing new in the unconditional love and companionship they provide us that has earned them the title "Man's Best Friend" for over a century now. Dogs rarely disappoint us which is apparent by the countless stories we hear about their acts of heroism. 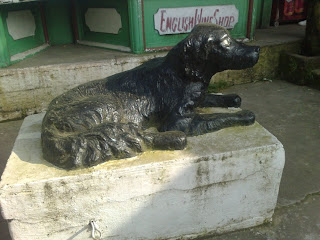 But then acts of vandalism is man's second nature…..some miscreants broke away the little hero’s nose……defaced him….and he had to get a new nose job….evidently not a good one, for his snout is too long and too upturned for a retriever. His eyes  I heard were of a  warm glistening brownstone...again these were gouged out. Today the eyes appear weird...painted white.
I still could not get his name….perhaps somebody reading this will be able to tell me. Perhaps one day he can have a proper pedestal and memorial plaque……And go on to become a tourist stop of Kasauli. 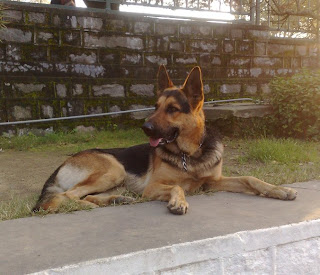 A stone's throw away fron the Kalyan hotel is Kastle Resort...They have German Shepherd called Benzer......He sits majestically on a parapet driving the monkeys out...who scare the patrons.
Apart from the story recounted above most little markers of the town’s colonial past are almost lovingly preserved by its Indian inheritors…..the cottages….the hydrants etc. 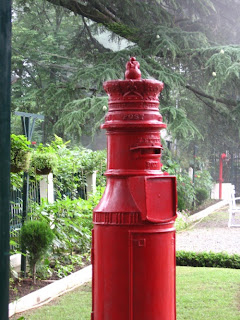 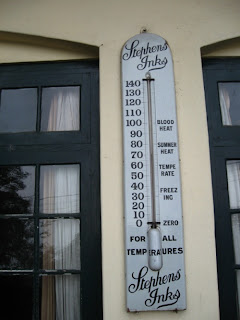 ‘Stephen’s Inks’  For instance, there is the large thermometer with ‘Stephen’s Inks’ emblazoned on it endorsing it for centuries outside the Alasia Hotel. Mrs Smolin was the dwindling of the line, in India, of formidable entrepreneurs who made India their home, Till a few years back, the late Mrs Smolin would step out of her room for elevenses on the terrace of the hotel and share her memories with those who cared to listen. In some ways, today’s Alasia, even if somewhat the worse for wear, still holds a piece of the old Kasauli – and you will still be able to get an old-fashioned ‘Anglo-Indian’ meal of mutton rissoles followed by trifle pudding. 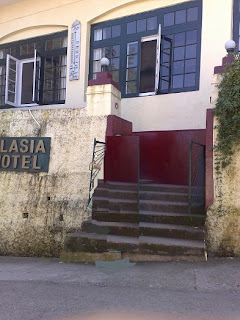