Showing posts from November, 2012
Show all

Guru Nanak - The founder of Sikhism 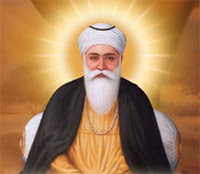 Guru Nanak Could we really call Guru Nanak the founder of Sikhism... The origin of the word  is  that a  founder  originally meant a person who forges steel; similarly, the  founder  of a company  is  forging the new entity.   Well, he did  carry a new message to preach and to foster and found a new entity, in the much distraught world, brought a new message for mankind, He  was known for his political, social and spiritual beliefs which were based on love, equality, fraternity and virtue Guru Nanak (1469-1539) was one of the greatest religious innovators of all time and the founder of the Sikh religion. Guru Nanak's birthday is celebrated by Sikhs on April 14th by the Nanakshahi Calendar. (The date according to the lunar calendar changes annually but is usually in November.) Nanak's religious ideas draw on both Hindu and Islamic thought but are far more than just a synthesis. Nanak was an original spiritual thinker and expressed his though
Post a Comment
Read more
More posts
Visit profile