The history of Punjab goes back to the times of the Indus Valley civilization and to the arrival of the Aryans, followed by devastation brought in by wave after wave of invaders for centuries.
Medieval Punjab saw the supremacy of the Mughals.

The Maharaja united Punjab and ruled it for nearly forty years. After his death in 1839, the Sikhs could not find another able leader who could keep the Sikh Raj intact. The following account is of the turbulent times the Sikhs had to face during the wars and eventual defeats.

Ranjit Singh in 1801 proclaimed himself Maharaja of Punjab, and thus the first Sikh kingdom was established. But it was the realm of Punjab, and he engaged Sikhs, Hindus and Muslims in governance, both on his army and administration. 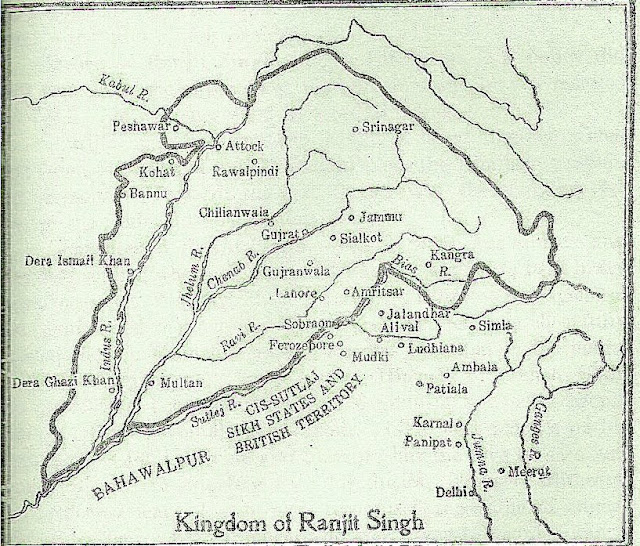 The period covering the rise and reign of Maharaja Ranjit Singh from 1799 to 1839, was the glorious and magnificent era of the growth ‘The Sikh Empire’ 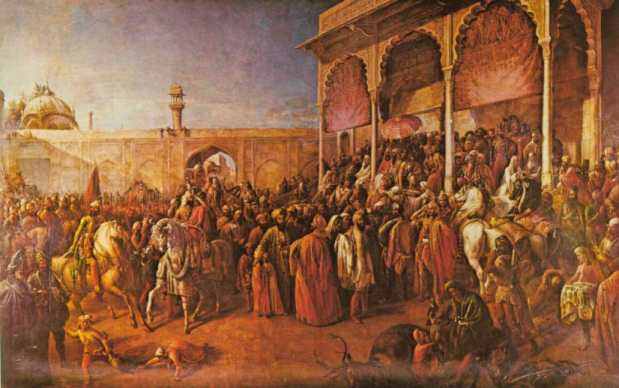 In 1826 when Ranjit Singh and the Punjab Durbar crossed over from the East to the West to build a kingdom which took in its stride all the territory through the N.W. Frontier up to Kabul in the west, and which included Kashmir, Ladakh, all the way to Tibet, way up north.


This was Ranjit Singh’s undisputed empire, conquered and governed by his Afghans, Gurkhas, Dogras, Muslims and Sikhs. As advisers and administrators, he had one of the famous Fakir Brothers, Azizudin, to look after foreign affairs, and Dina Nath a Kashmiri Brahmin to handle revenue and finance. 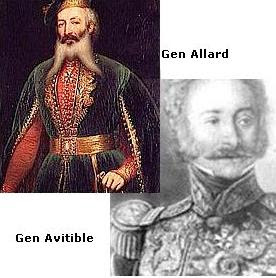 In his army, he employed great military captains from Napoleon’s Grand Armee: Jean Francis Allard, Jean Baptiste Ventura, Paola Avitable were amongst them. In Henri Court, he had a great caster of guns, who alongside Ranjit Singh’s master gunner, General Elahi Buksh, created regiments of artillery which could hold their own against any European army.

The British cautious opinion was that Ranjit Singh’s units were almost as good as the best in the British army and far superior to the mercenary "native" Indian units which were trained and employed by the British.

In favour of diplomacy, Maharaja Ranjit Singh held back the further expansion of his eastern frontiers, in consequence thwarting further expansionism designs of the British.
Following Ranjit Singh’s death on June 27, 1839, the Punjab Durbar went through a traumatic period, as there was no one who could continue his legacy. However, for the British, this was just the opportunity they were looking for to annexe the kingdom of Punjab. 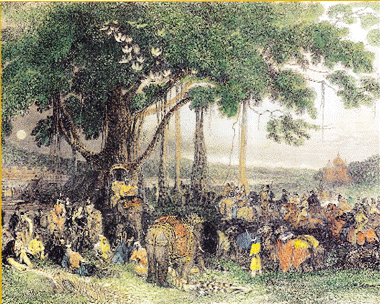 It is this period that takes us through the pinnacle of Punjabi rule under Ranjit Singh and highlights the great fighting qualities of the Punjabi soldiers. Contrary to above it exposes the fact as well, that internal intrigue and treachery have always been the bane of Punjab. 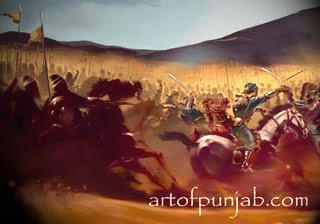 The slow decline of the Punjab Durbar thereafter, till the annexation of Punjab by the British, forms a very interesting period of North India’s history.

From December 1845 to February 1846 five Anglo Sikh wars took place resulting in the partial subjugation of the Sikh kingdom. It was the outcome of British expansionism and the near anarchical conditions that overtook the Lahore court after the death of Maharaja Ranjit Singh in June 1839. 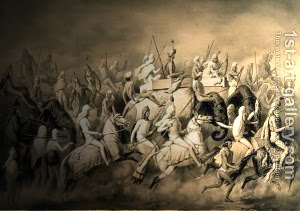 .Before the Sabraon battle of 10th February 1846, Gulab Singh Dogra, the de facto Prime Minister of the Sikh Government at Lahore was already in treasonable communication with the British and had promised to render  all possible help and aid the enemy to inflict a defeat on the Khalsa Army with a view to facilitating occupation of Lahore by the British forces. Gulab Singh Dogra had also his private army of 40,000 Dogras standing by, ready to come to the aid of the British, in case they found difficult to defeat the Khalsa Army.

While these battles were going on, Gulab Singh looted Ranjit Singh's treasury.

"Gulab Singh Dogra carried off to Kashmir the accumulated treasures of Ranjit Singh. Sixteen carts were filled with rupees and other silver coins, while 500 horsemen were each entrusted with gold mohurs (coins) and his orderlies with jewellery and other valuable articles"
(Latif, History of Punjab, page 507).

Lord Hardinge, the British Governor-General of India, in a letter dated 2nd March 1845 to his wife, Lady Hardinge, wrote,

"The man I have to deal with, Gulab Singh, is the greatest rascal in Asia" (Hardinge Family Papers, Penshurst, Kent).

The territory of Jammu and Kashmir.....85,000sq miles was given gratis by British, as a payoff to Raja Gulab Singh for the Dogra support in the Anglo Sikh wars.

General Sir Hope Grant recorded, "The fate of British India trembled in the balance. Truly, the night was one of gloom and foreboding and perhaps never in the annals of warfare has a British army on so large a scale been nearer to defeat which would have involved annihilation".

The British were preparing to destroy their documents and work out unconditional surrender terms to save their wounded. Then true to his treacherous role, Generals Tej Singh, Laal Singh and Gulab Singh arrived, the Sikh guns opened random fire even when the British had no more ammunition left to respond but suddenly, as they had promised the British, they withdrew their forces, leaving the battlefield to the British


The Sikh victory had been converted into a defeat, because of the betrayal of Dogra Sikh leaders like Raja Gulab Singh, Teja Singh and Laal Singh, the Sikhs lost to the British. In the war field itself, they disappeared from the Sikh forces and joined the British forces... Instead of mortar for cannons, they supplied mustered seeds to the Khalsa army.


It was aptly immortalised by what the famous bard Shah Mohammad had to say:

O Shah Mohammad, without Ranjit such was our plight
We won the battles, but we lost the fight.

The pain of betrayal was the root cause of the Second Sikh Wars, three years later.
Anglo Sikh War II, (1848-49), Described as 'the last attempt of Ranjit Singh’s loyal forces to recover independence', the battle of Chillianwalla ranks as one of the most remarkable encounters of the Second Anglo Sikh Wars. 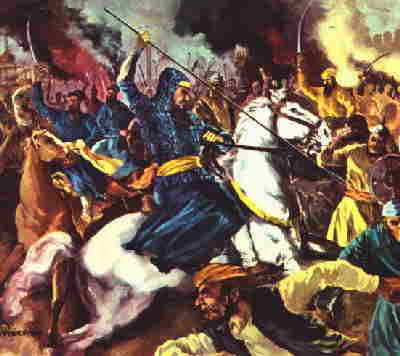 The Punjab Army, now under able commanders, got ready to pay back at Chillianwala the debts they owed the British. Lord Dalhousie declared war against the Sikhs on November 9, 1848. The first action gave the Sikhs a clear, morale raising victory. This time around, they were not going to let treachery get the better of them. Lord Dalhousie, stunned by this reverse, prepared for a major attack on the Punjabis....again. General Elahi Buksh’s artillery first brought the British advance to a standstill. Rain separated the foes for three days and on the fourth day the British withdrew.

Fought in January 1849, it was to be followed only a month later, by the battle of Gujarat which led almost directly led to the final surrender of the Sikh forces. Chillianwala.

Ultimately in the Battle of Gujarat on February 21, 1849, short of guns and manpower, the Punjab Army gave way to British infantry attacks and cavalry charges, to finally surrender near the Rawalpindi. So fierce was the battle, with such numerous casualties, that it created great disquiet in England. 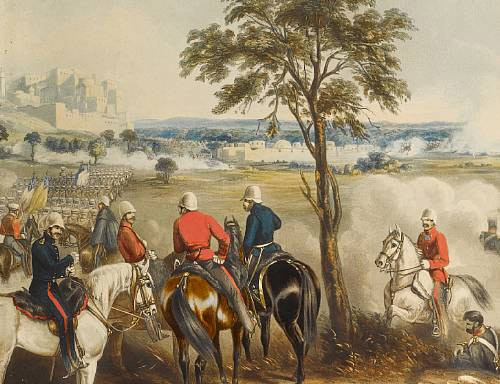 "The reluctance of some of the old Khalsa veterans to surrender their arms was evident. Some could not restrain their tears; while on the faces of others, rage and hatred was visibly depicted,"
wrote General Thackwell.

The remark of a veteran, as he put down his gun, summed up the history of Punjab:

Gradually by the terms of the treaty, the British succeeded in annexing a major portion of Punjab to their empire. Thus the monarchy formed by the genius of Ranjit Singh reduced to insignificance.


On March 30, 1849 in full Durbar at Lahore, the proclamation was read which formally placed the land of the Five Rivers under British sovereignty. The young Maharaja Dalip Singh handed over the Koh-I-Noor diamond to the British Governor-General and stepped down from his illustrious father's throne - never to sit on it again.


Thus, came to an end the empire that Ranjit Singh had built and along with it went the famous Kohinoor to the British.

The day we almost changed history……

The day was January 13, 1849, and there was a huge "outcry in England when news arrived that at Chillianwala a well trained and fully operational British army had been fought to a draw by wild Indian people".

The ‘wild Indian’ people, of course, were the dedicated soldiers of the Sikh army. They challenged what was till then considered the invincible British army, inflicting stunning casualties on a much better-equipped opponent. And almost changed History………of the subcontinent.

Had Chillianwala been followed up to its logical conclusion, the power equation in India would have dramatically changed. These, however, are the inevitable ‘ifs and buts’ of history.

Its traumatic effect on the British nation was similar to that of Balaclava and Gallipoli. This great action which shook the edifice of the British Empire in India

An interesting historical, fact is that the battle of Chillianwala was fought perhaps in almost the same area where Porus with his elephants, chariots and archers had battled Alexander’s cavalry 2175 years earlier.

Another interesting but little-known fact of history ……..is that every invasion into the subcontinent came from West to East across the Indus from 2000 — 1500 BC, when the Aryans came in, till the Duraanis up to 1818.

Maharaja Ranjit Singh reversed the route; he mounted invasions from east to west.