January 1st was not always the New year....

January, the month of new beginnings and is a time to cherish memories. It is the month in which winter weaves her magically festive spell about us with it's cool and crisp days.
This is the month where the temperatures plummet and we gladly look forward to log bonfires and with thick wisps of fog descending around us. And then the  New Year descends on us.

Happy New Year! That is the greeting that we will often hear for the first few weeks of 2012. But do you know that January 1st was not always celebrated as New Year's Day?

In the earliest times, the celebration of the New Year was one of the oldest recorded holidays.

It was first observed in ancient Babylon about 4000 years ago.


In the years around 2000 BC, the Babylonian New Year began with the first New Moon …..That is the first visible crescent after the Vernal Equinox; this was the first day of spring. The beginning of spring is a logical time to start a new year, after all, it is the season of rebirth, a season of regeneration you could say. It was the time for planting of new crops and of blossoming.

The present-day January 1, on the other hand, has no astronomical or agricultural connotation. It is purely capricious.

The Babylonian New Year celebration was a real carnival true sense. They were a pageant of festivities that lasted for eleven days; each day had its own specific and definitive style and reason of celebration. In comparison, New Year's Eve of present-day festivities pales into insignificance

Now let us see as to when January joins the Calendar…


In fact, the month of January did not even exist until around 700 B.C. The second king of Rome, Numa Pontilius, added the months of January and February.

The first time the New Year was declared to be on January 1st by the Roman Senate was in Rome in 153 B.C.  The new year was moved from March to January because that was the beginning of the civil administration year. It was the month that the two newly elected Roman consuls—the highest officials in the Roman republic—began their one-year tenure.


But tampering continued with Julius Caesar as well, in 46 BC, he established what has come to be known as the Julian calendar. He introduced a new, solar-based calendar that was a vast improvement on the ancient Roman calendar, which was based on the lunar system that had become wildly inaccurate over the years. Now January 1 was back again as the New Year, but in order to synchronize the calendar with the sun, Caesar had to let the previous year drag on for 445 days.

After this aberration the year was 365 days long, with an additional day added every four years.

In the medieval Europe, however, the celebrations accompanying the New Year were considered pagan and were considered not Christian, and they abolished January 1st as the beginning of the year.

At various times and in various places throughout medieval Christian Europe, the New Year was celebrated on Dec. 25, the birth of Jesus.

The British, for example, did not adopt this calendar until 1752.

From this you can see that The NEW YEAR has had quite a colourful travel through history. 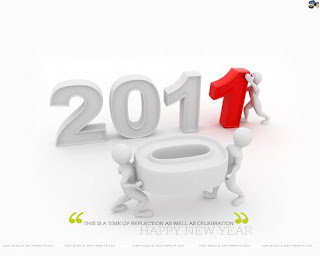 HAPPY NEW YEAR to all my friends
Stories to Tell